Enzo Maccarinelli continues his march back to a world title 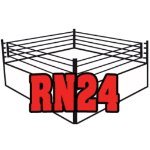